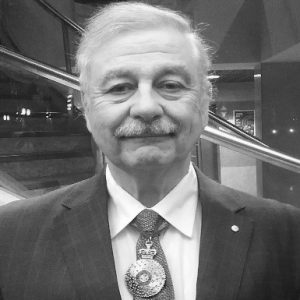 Professor Rhys Jones, AC, joins SEAM from January 2021 as a Senior Associate Investigator as well as Adjunct Professor of Swinburne University in the Department of Mechanical Engineering and Product Design Engineering. Professor Jones brings across a plethora of experience and will be working with SEAM’s Early Career Researchers and Chief Investigators across a number of projects and provide guidance and mentorship contributing practically to SEAMs research objectives.

Professor Jones obtained his PhD, on plate and shallow shell theory, from Adelaide University (1974), subsequently joining Swinburne as a Lecturer in Civil Engineering. Professor Jones joined the Australian Defence Science and Technology Organisation’s Aeronautical Research Laboratory (ARL) in 1976. Until 1993 he held the position of Research Leader in Aircraft Structures and Materials Division at ARL. Professor Jones joined Monash as the Chair Professor of Mechanical Engineering in 1993, retiring in 2017, retaining his affiliation as Emeritus Professor. He was made a Companion of the Order of Australia in the 2018 Australia Day Honours List, the highest Award given to an Australian Citizen.

With an H-index of 49 and more than 500 publications with 11,000+ citations Professor Jones has made significant contributions to the fields of composite and bonded structures; airworthiness; experimental mechanics; fracture mechanics; additive manufacturing and cold spray additive manufacturing. With Neil Mathews (RUAG Australia) he is acknowledged as pioneering the use of cold spray to extend the life of operational aircraft and holds two patents on this topic.