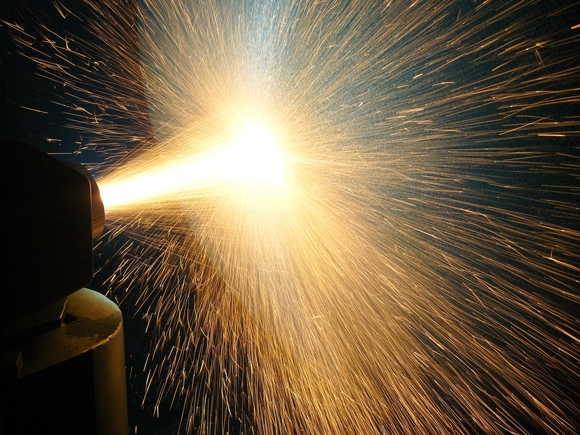 Watch the Webinar via the link on the image.

Thermal spraying is a directed melt spray deposition process, in which inorganic particles in the diameter range of 1-100 microns are heated, melted (in some cases partially), propelled and impacted onto a prepared substrate. A rapid sequence of events occurs including: melting, impact (in some cases shock), spreading and rapid solidification, all of which take place in microsecond timescales, enabling materials synthesis from extreme conditions. The sprayed coating is resultant from successive assemblage of such microscale impacted droplets (splats) producing mesoscale thick films or coatings. The coatings thus produced are anisotropic, layered structures with multiple length scales of material character and interfacial defects, with concomitant implications on properties. The layered assembly also imparts gradients in residual stresses within the thickness of the coating. These effects are in large part deemed “unintentional” and incorporated in many applications with limited manipulation.

With advancements in understanding of process dynamics and the ability to control microstructures at both the splat and coating level, a fresh opportunity is available to engineer the layered assembly to provide novel through thickness properties and functionalities. In a sense, thermal spray can be considered within the context of emerging additive manufacturing concepts where the characteristics of the assembly can be manipulated across different available length scales. In this presentation, several embodiments of such concepts will be shown using the interplay among coating architecture design, materials and manufacturing. Specific examples include novel multilayer, multifunctional thermal barrier coatings, multifunctional coatings in fuel cells, thermoelectric devices and smart coatings with embedded sensors. Illustrative examples of their applicability in industrial systems will also be highlighted.

Dr Sanjay Sampath, is Distinguished Professor of Materials Science and Engineering at Stony Brook University (SUNY) and director of the Center for Thermal Spray Research (http://www.sunysb.edu/ctsr) an interdisciplinary industry-university partnership in the field of thermal spray materials processing and surface engineering.  The self-sustaining Center (since 2005) is home to the Industrial Consortium for Thermal Spray Technology comprising of 35 leading companies aimed at knowledge transfer from fundamental research to applications. He was also principal investigator on the DARPA Mesoscale Integrated Conformal Electronics (MICE) project enabling 3D printing of sensors via direct write thermal spray technology. Dr Sampath has 180 journal publications to his credit, 13 patents and winner of several best paper awards. He has advised more than 40 MS and PhD students over 20 post-doctoral fellows and more than 100 undergraduates. He received the SUNY Chancellor’s Award for excellence in scholarship and creative activities in its inaugural year, was elected Fellow of ASM International, recipient of 2007 R&D 100 award for developing direct write technology and was inducted as Fellow of the American Ceramic Society. In 2011, he was recognized as a State University of New York Distinguished Professor, highest faculty designation of the SUNY system. In 2015 he was inducted into the Thermal Spray Society Hall-of-Fame. In 2017 he received the Application to Practice Award from TMS the Materials Society, the recipient of the John Jeppson Award from the American Ceramic Society in 2019 and Albert Sauveur Achievement award from ASM International in 2020.

Email seam@swinburne.com.au if you have any questions.