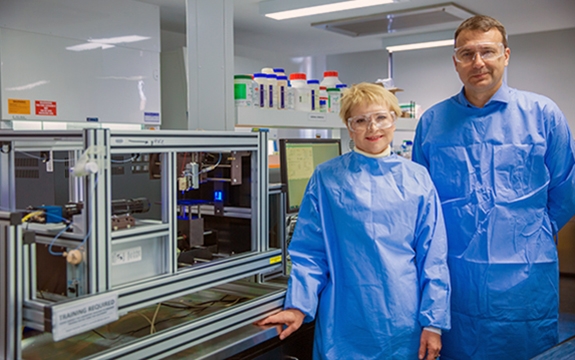 A SEAM publication on the bactericidal action delivered by rigid nanopillar arrays stems from the mechanical rupture of the bacterial cell membrane; however, the precise mechanism may be unique to the individual nanopillar geometries.

In this work, the researchers present a new model of mechano-bactericidal action, which is specific to the elasticity of highly ordered arrays of symmetrical silicon nanopillars. Specific control over the height and spacing, simultaneously was achieved using carefully controlled deep UV immersion lithography and plasma etching. At a certain aspect ratio, nanopillar elasticity contributes to the onset of pillar-pillar interactions upon bacterial adsorption to the surface. While previous mechano-bactericidal models have described the nanopillar surface as a ‘bed of nails’ which assumes complete rigidity in the surface structures this work confirms the elastic pillar-pillar interactions to be reversible cluster formations which are capable of delivering pillar-induced tension to the bacterial membrane due to their flexible bending and straightening motions. The enhanced rates of bactericidal activity observed in this study for pillars of 360 nm and 35 nm diameter can be attributed to the stress-induced deflection of the nanopillars upon bacterial membrane adsorption which generates increased stretching of the membrane as the pillars deflect and revert to their original position as opposed to the mechanistic action developed for rigid nanopillars i.e., those found on cicada wing surfaces.

Email vstefanovski@swinburne.edu.au for any queries and questions.